Happy National Donut Day!
Growing up, in the home of Captain John Zaruba, donuts were a regular breakfast choice.  I can remember one Easter in particular where we were heading up to grandma’s house and stopped to get donuts.  I popped in my headphones, munching on a strawberry frosted.  When I went back for a second, they were all gone.  “WHERE DID THEY GO?!” I asked my mom in disbelief….”Ask your father”, she told me, as he proudly popped the rest of the deliciousness in his mouth.  The story became well known throughout our family. To my cousins, my father became Uncle Donut, which later spread to friends and morphed into the now popular title (even stored on my phone) Captain Donut.  Quite the prestigious title it turns out.

It wasn’t until about 5 years after this scene (and many other similar incidences along the way…) it came to my attention that the modern donut was actually created by a sailor by the name of Captain Hanson Gregory of Rockport, Maine.  Captain Gregory’s mother, Elizabeth Gregory was known for making a very fine olykoek (Dutch for “sweetened cake fried in fat”) with a hint of nutmeg and a filling of hazelnuts or walnuts.  Donuts at this time did not have holes through the center and were not cooked all the way through, leaving the center raw and mushy.

There are a few arguments over the particulars of how he came to be named the father of the modern donut, but one of the most agreed upon is definitely the most satisfying.  It is said that one day in 1847, while out at sea a storm caught up with Captain Gregory.  He was eating a hot cake and in order to free his hands up, stuck the doughnut through the center with a spoke from the helm.  He decided it was then better this way, and shared the technique with his mother, who from then baked her doughnuts this way.

Captain Gregory has made his mark of fame on the world of donuts.  In Alexandra, VA, there is a hidden restaurant inside a donut shop called Captain Gregory’s.  There has even been a small statue of him in the National Museum of American History in Washington, D.C. 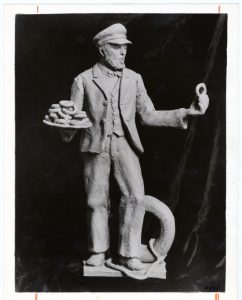 And in his hometown of Rockport, Maine, there is a tiny memorial to the original Captain Donut. 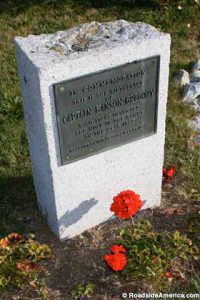