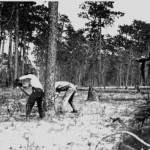 Despite the much told stories of pirating in St. Augustine, the town’s most prolific maritime venture was the legal trade of Florida Yellow Pine. I know, it doesn’t sound as exciting but Florida Yellow Pine was so desired, it was considered a huge bargaining chip between two world powers, England and Spain. Florida’s timber trade began in Pensacola, FL in 1743, with the first shipment containing pitch, turpentine, and 2 Florida yellow pine spars, each 84 ft. long, on a packet schooner bound for Havana. The first water-powered sawmill was built on Six Mile Creek in Jacksonville in 1819. Six Mile Creek is a shoot-off of the St. Johns River, which provides plenty of navigable water for schooners to enter and depart the Atlantic Ocean with their loads.

When speaking about the prolific pine trade in Florida, one must mention Francis Philip Fatio.

He was a Lieutenant in the Swiss Guard who, in 1724 sailed his family from England to St. Augustine. Fatio built 3 plantations along the St. John’s River to cultivate indigo, extract turpentine from timber, grow oranges, and raise sheep. His plantations were built on a tract of land that he named New Switzerland; it later became Nueva Suiza during Spanish rule. Fatio kept numerous schooners running to England and later Spain with shipbuilding materials; they would return with luxury wares he sold to local Floridians. Fatio was a natural businessman and saw the potential of the Florida yellow pine. The English navy needed a steady and cheap source for shipbuilding materials – turpentine, pitch, tar, and, most importantly, lumber.
What’s so special about Florida Pine you may ask? According to the University of Florida, at one point Florida yellow pine covered up to 60 million acres. Its most attractive feature is that it grows relatively quickly, typically growing 60 to 80 feet tall, occasionally reaching heights of over 100 feet. The trunk of the tree grows straight with coarse branches radiating 15 to 20 feet and drooping slightly from a single central leader.
This prompted Francis Philip Fatio to write to the English government of Florida’s timber potential. The British government was considering trading Florida for the Bahamas, and, more importantly, Gibraltar, a strategic location to own given it’s proximity to Spain, France, and the Mediterranean. Fatio was trying to convince the British government not to relinquish control of Florida to the Spanish.

An excerpt from his letter to King George III: 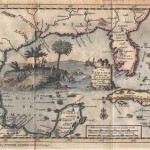 “The barren lands now occupied in East Florida produce the best naval stores in all America. The St. John’s River is navigable nearly 300 miles, running parallel to the Atlantic Ocean, nowhere distant more than 25 miles. The forests on these lands will produce any quantity of tar, pitch and turpentine; it would be easy to find substantial contractors for 100,000 barrels a year produced from the different species of pine, allowing a reasonable time at first, as the exportation in 1781 has not exceeded 30,000 barrels.
“The yellow pine of East Florida is remarkably large, straight and of fine grain – rather heavy for single stick or large mast. For made masts, I humbly apprehend, it would be very proper as it is easy to find large trees free of all kinds of knots – from 40 to 50 feet in length – for deck planks no wood is equal to it. I had some sawed above 40 feet, free of knots and clear of heart shake.”

Despite his best efforts, in 1783 George III traded east and west Florida for the Bahamas and Gibralter. Seeing a shortage of settlers, the Spanish governor allowed Fatio and his son-in-law the right to stay if they swore allegiance to the Spanish crown. He became Francisco Phillipe Fatio and provided naval stores to Spain until his dying day.

How to Pick a Pirate out of a Group of Privateers