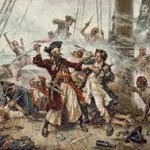 fancy clothing, while sailing around the world living the ideal life, and doing pretty much whatever they wanted.  While this is true, it’s highly a highly romanticized picture thanks to the overwhelming love of pirates by the media. What is less accepted is that pirates were pretty bad people who were killers, thieves, and generally didn’t live for very long.

Some of these “pirates” people talk about so frequently may actually not have been pirates at all, some were privateers working for their country, and you’ve just been hearing one side of the story.  These privateers did everything a pirate would, except they were doing it for their country, and any treasures taken would be given to the Crown. The privateers in return would receive a percentage of money given to the Crown.  At least now you had one less country to worry about seizing your ship.

Take Sir Francis Drake for instance; while Spain most likely  (and quite possibly continues) to label him a pirate, Drake had letters of marque from the Queen of England and therefore his ransacking  was considered “legal” (under English rule of course).  In 1586 Drake burned the town of Saint Augustine to the ground after pillaging it, and discovering little value, carried on north to Roanoke.  Saint Augustine carried on.

Another well-known attack on Saint Augustine was made by the Privateer Robert Searles- though with him we use the term a little more loosely, because he tended to do a little side work for himself along with taking home “glory” for the Crown of England.  He, like Drake, pillaged Saint Augustine in 1668 took what he could, and burned the rest down.  The attack was sneaky and in the dead of night, with the help of two Spanish pirate ships.  Around 60 people in Saint Augustine died that night, nearly a quarter of the population, and the only reason the rest survived was because Corporal Miguel de Monzón had been out fishing and heard the pirates coming and rowed back as fast as he could, while being shot twice.

Privateers were very useful for a young United States during the war of 1812.  Privately owned and operated schooners signed on to help the US Government in fighting back Her Majesty’s Royal Navy, by signing on as privateers.  Schooners could quickly sail in and out of ports, go in shallower waters, and had all over better maneuverability than ships of the line for the Royal Navy, making the War of 1812 a key success for the United States.

The line between pirates and privateers is a blurry one, and certain individuals definitely stuck to the code more so than others. It is important to remember that history is written by the individuals who won the battle.