If you’re looking for some cool summer reading, might we suggest Alfred Lansing’s Endurance: Shackleton’s Incredible Voyage. I read this book last summer cover to cover in under a couple of days, it was that riveting. If you’re not familiar, the saga of polar explorer Ernest Shackleton’s survival for over a year on the ice-bound Antarctic seas, as Time magazine put it, “defined heroism.” On August 1, 1914, the same day Germany declared war on Russia, Shackleton departed London on the ship Endurance to the South Pole. The goal of his expedition was to cross the Antarctic overland. The ad Shackleton posted in the paper to raise crew kind of explains the conditions any takers could expect: 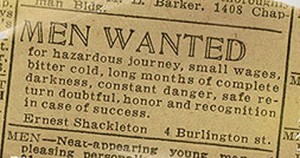 “Men Wanted For Hazardous Journey, Small wages, bitter cold, long months of darkness, constant danger, safe return doubtful. Honour and recognition in case of success.”
By late fall the crew had reached South Georgia in the southern Atlantic. On December 5, the team departed the island, the last time Shackleton and his men would touch land for an astonishing 497 days.
In January 1915, the Endurance became trapped in ice, ultimately forcing Shackleton to lead his men to vacate the ship and set up camp on the floating ice. After the boat sank later that year, Shackleton embarked on an escape in April 1916, in which he and his men crowded into three small boats and made their way to Elephant Island.

Seven hard days on the water culminated in the team reaching their destination, but there was still little hope in getting rescued on the uninhabited island, which, because of its location, sat far outside normal shipping lanes.
Seeing that his men were on the precipice of disaster, Shackleton led a team of five others out on the water again. They boarded a 22-foot lifeboat and navigated their way toward South Georgia. Sixteen days after setting out, the crew reached the island, where Shackleton trekked to a whaling station to organize an rescue effort.
On August 25, 1916, Shackleton returned to Elephant Island to rescue the remaining members of his crew. Astonishingly, not a single member of his 28-men team died during the nearly two years they were stranded.