This morning seemed like a good morning for a fun fact post on Facebook. The phrase I chose was ‘take the wind out of his sails.’ This phrase refers to a ship battle technique of maneuvering your vessel to the windward of another vessel. The ship and it’s sails block the other boats wind and your opponent loses all maneuverability. In my search to find a great battle picture, I ran across the artwork of Patrick O’Brien. Not to be confused with Patrick O’Brian of Master and Commander fame (but seriously, it must be something to do with the name), Mr. O’Brien with an ‘e’ paints amazing works of marine art. The painting I chose to feature on our Facebook is his piece entitled The Battle of Lake Erie.

The Battle of Lake Erie was fought on September 10, 1813. Captain Oliver Hazard Perry’s decisive victory over the British fleet ensured American control of the Great Lakes during the War of 1812. During the battle, Perry flew his famous flag which read “Don’t Give Up the Ship.”

The nine vessels of the American fleet were outweighed and outgunned by the six ships of the British fleet. Commod 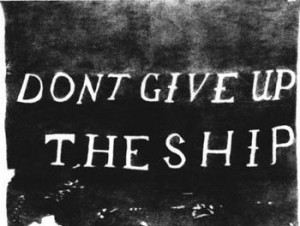 ore Perry’s flagship was destroyed in the course of the battle with most of its crew killed or wounded. However, Perry got into a boat and was rowed a half-mile through heavy gunfire to transfer his command, and his flag, to the USS Niagara. He sailed Niagara into close action, broke the British battle line, and forced the British to surrender. After the battle, Perry sent his famous message “We have met the enemy and they are ours.”

The painting depicts the moment when the Niagara has sailed across the bows of the two British ships Detroit and Queen Charlotte, which have collided with each other.

Perry would have been 28 years old when he courageously rowed through the ongoing battle. Although he had won the battle aboard the Niagara, he received the British surrender on the deck of the recaptured Lawrence to allow the British to see the terrible price his men had paid. Perry’s battle report to General William Henry Harrison was famously brief: “We have met the enemy and they are ours; two ships, two brigs, one schooner and one sloop.” This was the first time in history that an entire British naval squadron had surrendered, and every captured ship was successfully returned to Presque Isle.

Check out the rest of Mr. Patrick O’Brien’s beautiful marine scenes at his website .