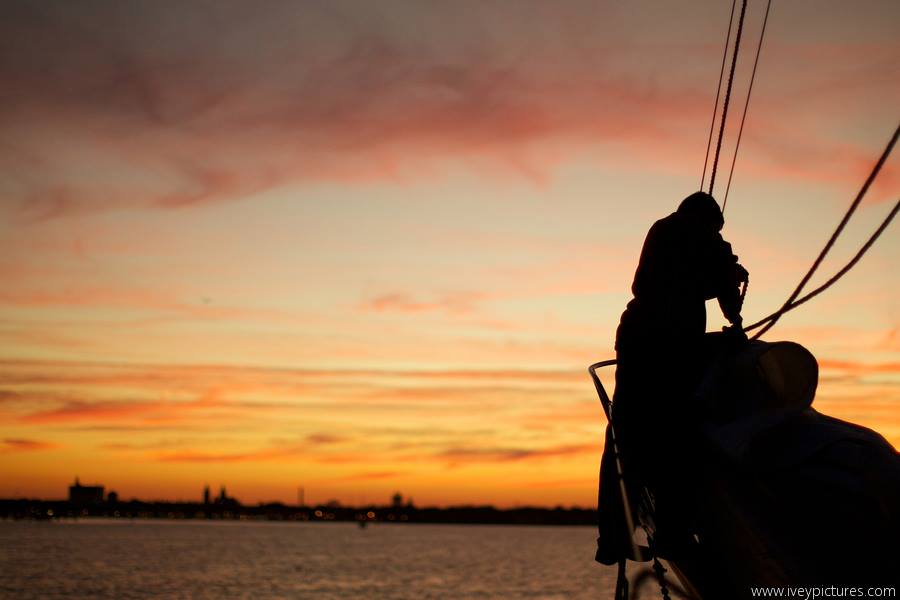 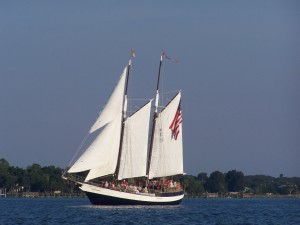 Freedom is an authentic replica of a 19th-century blockade-runner. She is a double masted, gaff-rigged, topsail schooner. Naval architect Merritt Walters and his marine construction company, Rover Marine, Inc., designed and built Freedom, the first of his many Rover schooners, in 1982 in Norfolk, Virginia. The Schooner Freedom is built of steel with aluminum masts and spars. The Freedom’s sparred length is 76 feet while her length on deck is 64 feet. Freedom’s beam is 15 feet 4 inches and her draft is 6 feet. Her main mast height is 62 feet and she carries a total sail area of 2400 feet. Freedom was built with stringent attention paid to water depth and bridge height along the Intracoastal Waterway, making her the perfect vessel for both inland and offshore sailing. The Freedom was the first sailing tour boat to be certified under the Coast Guard sub-chapter ‘T’ to carry passengers for hire since the great days of sail. Under this certificate she is licensed to carry forty-one passengers and required to have a master and two crew members.

The Captains and Crew 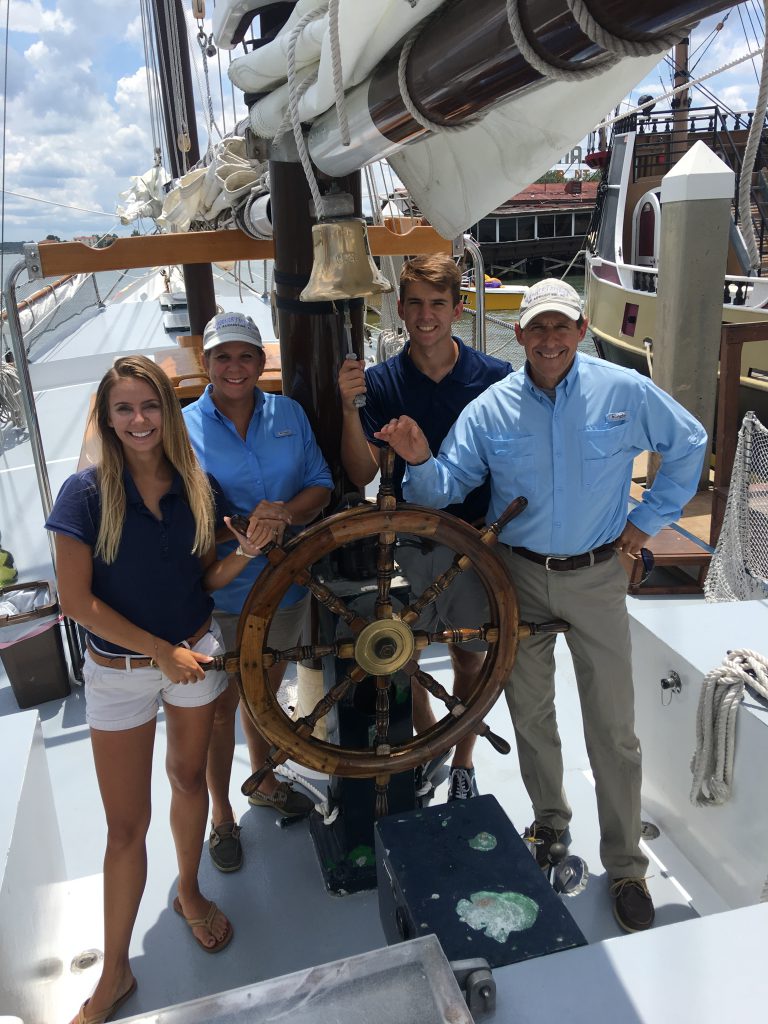 John & Sarah have been sailing for most of their adult lives. Over the years, John and Sarah owned and sailed on a 32 foot West Sail they rebuilt and named  Athene, which they quickly outgrew as their family grew. They currently sail on their 56′ Ketch TARA, when not aboard the Freedom.
They have logged thousands of miles under the keel, sailing between Texas to the Florida Keys and up to Ma. They have also had the privilege to sail with their daughter in the Med on the super yacht she works on. John and Sarah purchased the Freedom in 2000, completed a year-long refit, and launched her in 2001 as a charter boat in St. Augustine, FL.
Freedom is a labor of love! She isn’t just a boat, She is considered to be one of the Family!
We are very humbled by the fact we get to sail for a living. We are blessed to be able to do what we love and share that passion and joy with all of you!
Welcome aboard! 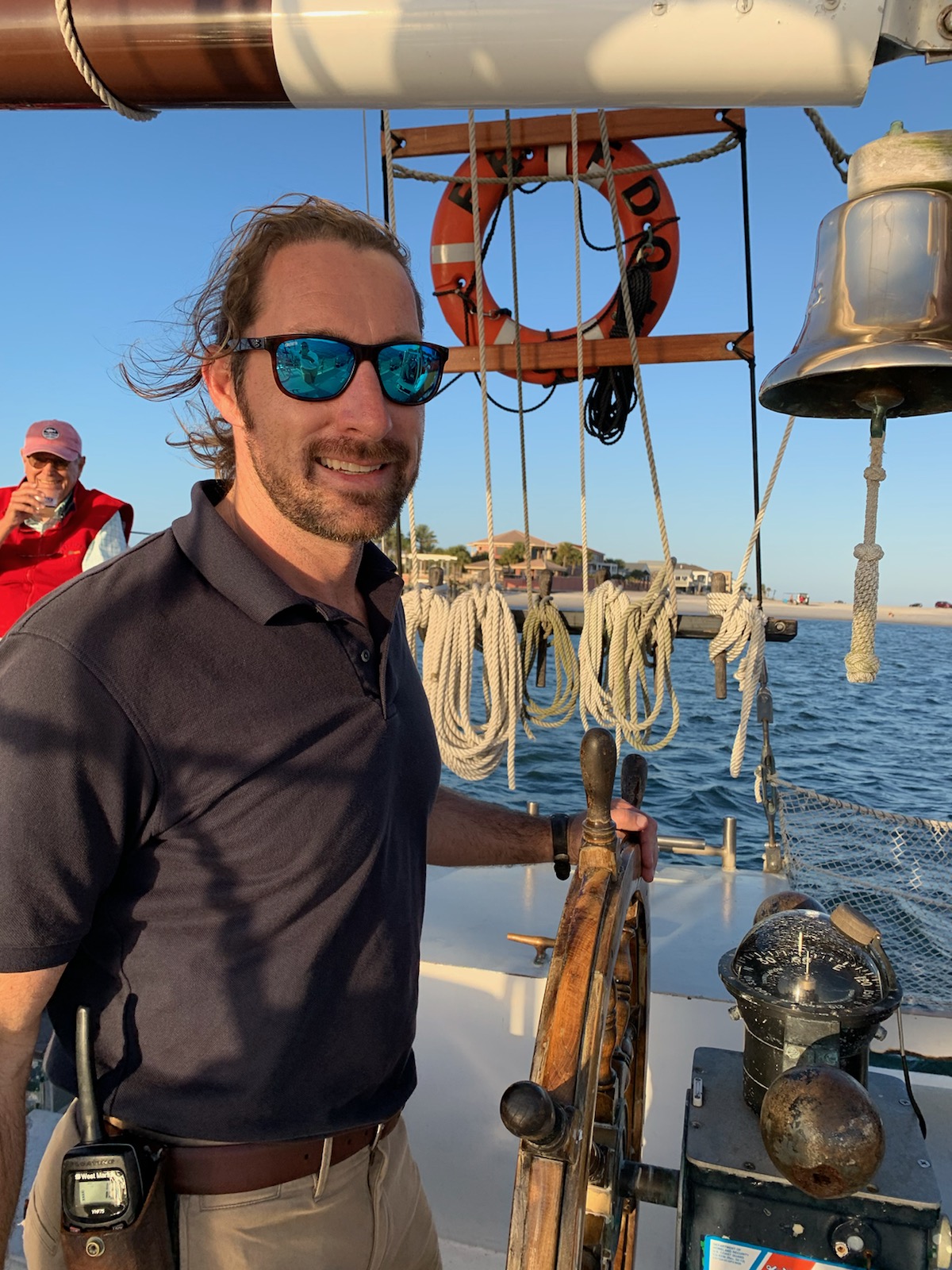 Captain Evan, was born and raised in New Hampshire. Evan purchased his first boat at the age 14 and was hooked! He is new to, but already in love with St. Augustine, relocating here to skipper the Freedom in 2021. Evan has been a  full-time liveaboard sailor off and on for the last 10 years, enjoying his own 38’sailboat Cordelia.  He travels have taken him to the Caribbean, as well as the  South Pacific to the French Polynesia, where he was a Catamaran Captain , logging over 12,000 ocean miles. For the last few years, in the offseason Evan has been a snowboard instructor in New Hampshire, enjoying the best of both worlds! Evan loves to share his deep passion and love for the ocean and sailing with our guests aboard Freedom.
Fun Fact:
Evan studies the Art of Jiu-Jitsu, and has a brown belt! 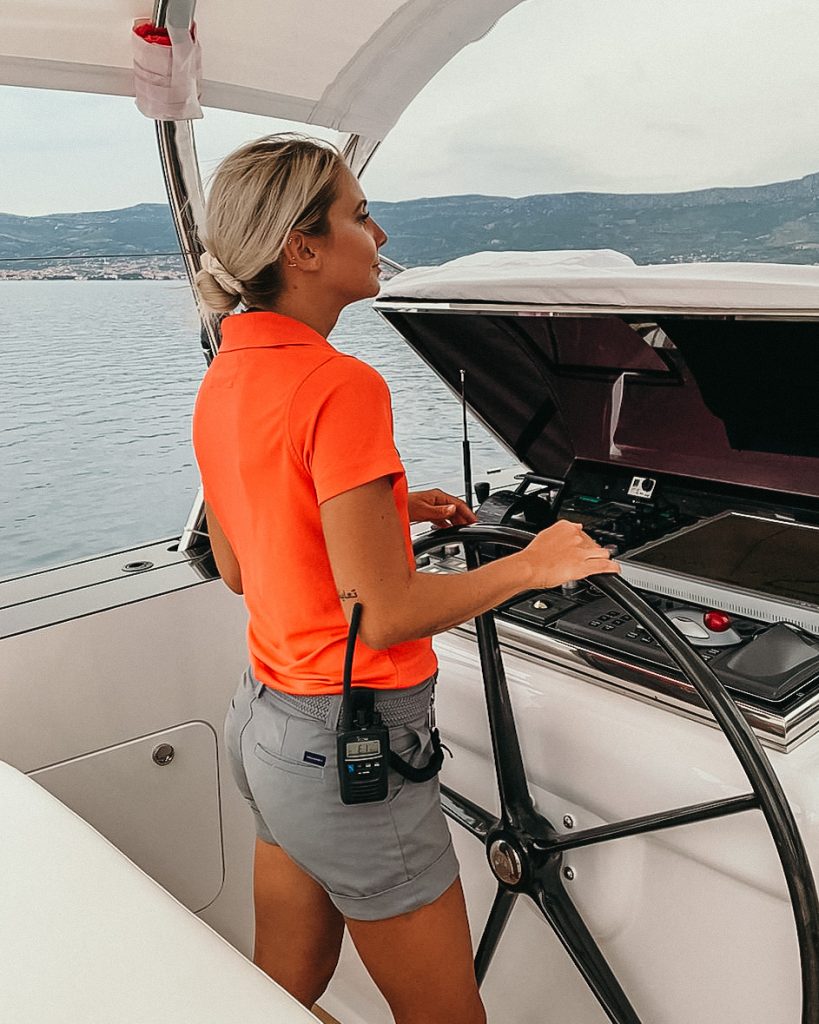 Sydney has been sailing her entire life. Born and raised on her parents’ boat, the Athene, Sydney went sailing for the first time at the tender age of 6 days old and hasn’t stopped since. Since the Freedom’s launch in 2001, she has been either below decks, doing homework, above decks, working the sails, or behind the scenes, working the office and as our resident blogger and social media expert. She graduated from the University of Florida in 2017 as a Broadcasting and Communications major and is a world traveler and yogi, always looking for the next adventure.  Sydney also works as a travel agent with Explorateur Travel and is a travel blogger at The Boho Traveller.  Sydney  currently works on Super Sailing Yachts, upgrading her license , she is based Palma, Mallorca and will return to Freedom in the Spting 2023!
Fun Freedom Crew Fact:
Sydney has visited over 30 countries 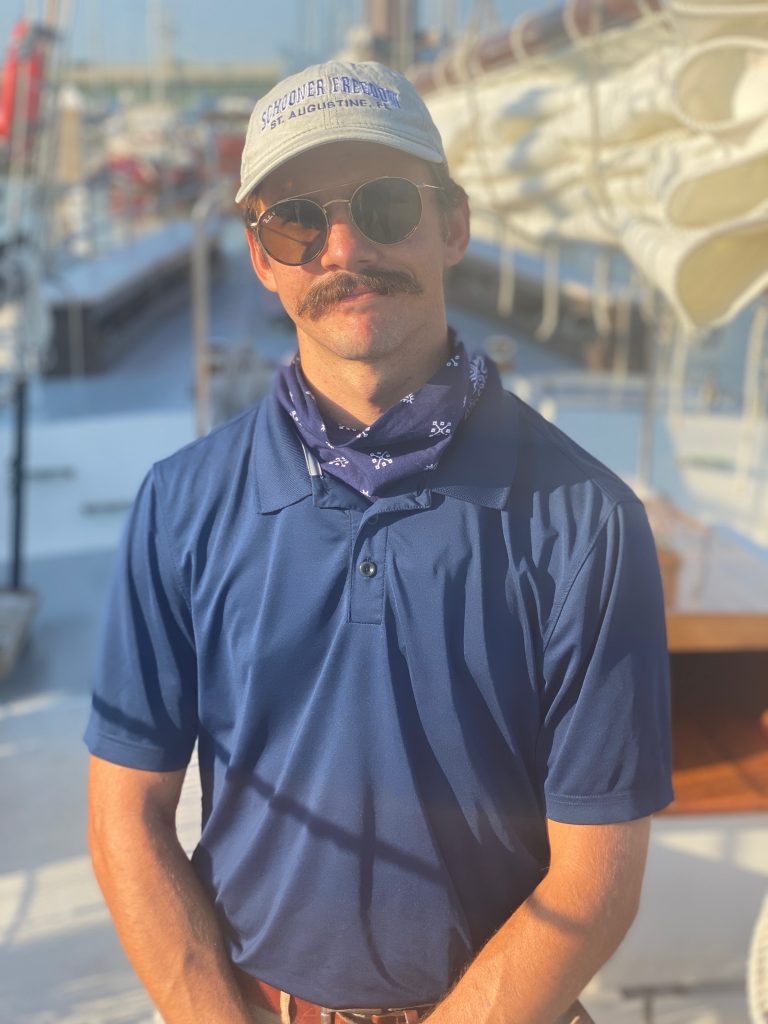 Jack, the youngest child to John and Sarah, is 23 years old and is a graduate from Fort Lewis College in Durango, Colorado, with a degree in Business, with a discipline in Tourism and Hospitality. He has been on ships his entire life, and joined the ranks of the crew at a young age of 2, being the favorite of many a passenger aboard the ship.  When not working Jack loves to work on his 1970 TR6. Jack has decided to train as the next captain of the Freedom, since he learned becoming a T-Rex is out of the question.
Freedom Crew Fun Fact:
Jack truly is a son, of a son, of a sailor! 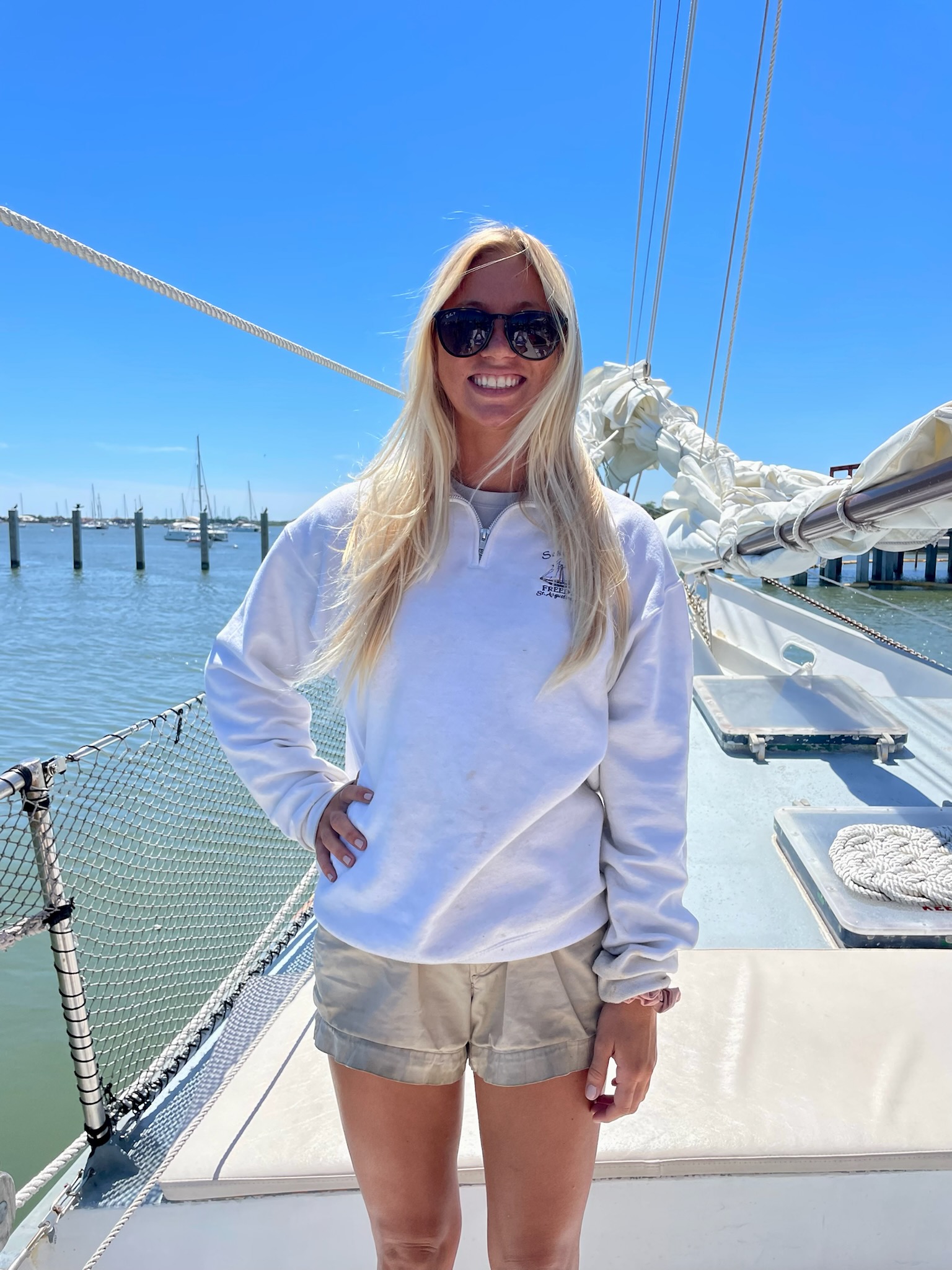 Hope is orginally from Salisbury MD where she was involved in everything outdoors, from horseback riding to lacross to boating. Her love of boating and the surf led her to go to college in St Augustine.  Hope is a 2021 Flagler Graduate with a degree in Accounting.
She has been a crew member on the Freedom  for the last 4 years. When Hope isnt onboard you can find her surfing, rock climbing or fishing.
Freedom Crew Fun Fact:
Voted Most Chill in High School and the Most Chill of all the Crew!! 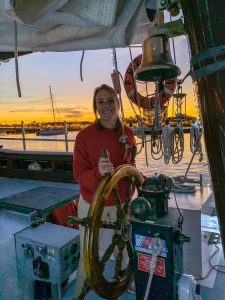 Taylor was born and raised in St. Augustine. She is a graduate from Clemson University with a degree in Animal and Veterinary Sciences. While in Grenada furthering her degree is where she discovered another one of her passions; Everything on the Water! Sailing, Scuba, free diving, and ocean conservation. Taylor has logged thousands of sailing miles and you can keep up with her on her blog Tea n Sea Travel.
Freedom Crew Fun Fact:
Taylor is an avid Horsewoman & loves Bungee jumping 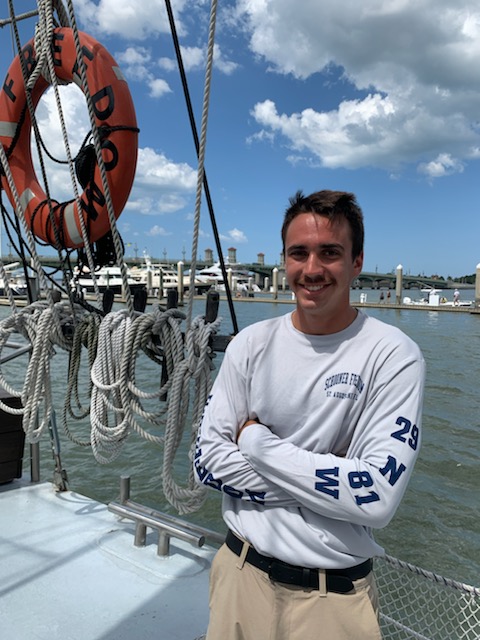 Noah is a St Augustine native and attended Florida State of Jax. He has spent the last year and half living in Italy, Croatia, & Bosnia, he is fluent in all three languages. Noah is getting his degree in Building Construction. Noah is actively looking for a sailboat for a life and career on the water.
Freedom Crew Fun Fact:
Noah is the Favorite “Fun” Uncle in his Family
Dreams of being a Standup Comedian! 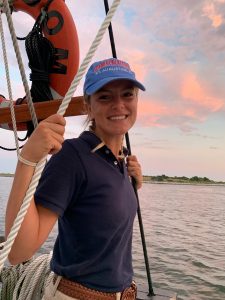 Cara  Bevilacqua
Cara is a native New Yorker with a passion for travel, the Arts and any outdoor activity- especially camping! With a degree in Art from Flagler College she operates a small business teaching art classes online to people all over the country.  Cara is trained in River Dance( fun fact) and loves spending her free time road tripping, crafting and now SAILING!
You can find out about Cara’s art at cdsworkshops.com or @coastaldesignworkshops
Freedom Crew  Fun Fact:
Cara is quite  skilled in River Dance! 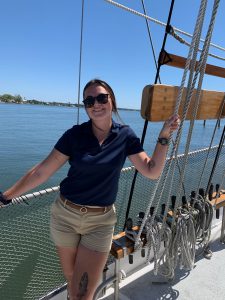 Mackenzie Kohlbeck
Mackenzie is a native Floridian born and raised in St Augustine. She has studied Marine Biology at The University of West Florida and hopes  to get into the University of North Floridia’s Shark and Ray Program so she can follow her passion of elasmobranch conservation. Mackenzie ‘s end goal is to make documentaries raising awareness for marine conservation. She hopes to own her on ecotourism shark business so she can educate people  about the importance these magnificent creatures are and their importance to marine preservation.
Freedom Crew Fun Fact:
Mackenzie is a skilled free diver and loves swimming with sharks! 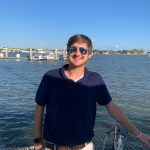 Martin Burnette
Martin is a Georgia transplant and
a recent graduate of Flagler College with a degree in Business Administration and Marketing.  He works both the office and the boat. He is looking forward to owning his own upscale dinner cruise one day.
Freedom Crew Fun Fact:
Martin plays the trumpet and loves working on old cars! 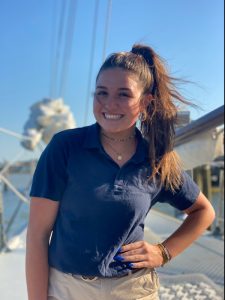 Kalina is a Florida Native and is in her senior year. She is currently on a national Tavel Volleyball Team.
She wants to major in Biology and become a marine biologist!
Freedom Crew Fun Fact:
She once appeared on The Today Show in NY!

Originally from New York, Gina attended Belmont in Abbey, NC with a BA in psychology.  She moved to St. Augustine from NY in 2013 after owning a spa for 7 years.  Gina Has one fur baby named Lucy. Gina Loves to bake, be in the sun, travel, and living close to the beach is a dream come true. She is currently learning Italian, and is happy to be the Freedom’s Office gal extraordinaire. 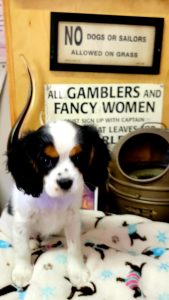 Lucy
Office Mascot and Generator of Spontaneous Smiles! Lucy is a Cavalier King Charles Spaniel
She keeps Gina on her toes full time in