In this day and age of weather apps that instantly give us condition updates, it can be easy to forget that for hundreds of years, sailors used cloud shapes as weather indicators. Take the classic sailor’s saying, “Mackerel skies and mare’s tails, means you soon shall shorten sail.”

Let’s take a look at the different clouds and what they indicate.
Clouds belong to one of four base categories that use Latin words to describe the appearance of the cloud from the ground. The four principle categories are:
Cumulus, meaning heap
Stratus, meaning layer
Cirrus, meaning curl of hair
Nimbus, meaning rain
Further classification within these fours groups identifies clouds by height of the cloud base. 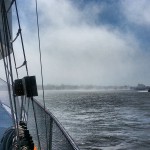 Low Clouds – Stratus
Stratus clouds are uniform grayish clouds that often cover the entire sky. They resemble fog that does not reach the ground. Usually no precipitation falls from stratus clouds, but sometimes they may drizzle. When a thick fog “lifts,” the resulting clouds are low stratus.
Nimbostratus clouds form a dark gray, “wet” looking cloudy layer associated with continuously falling rain or snow. They often produce precipitation that is usually light to moderate. 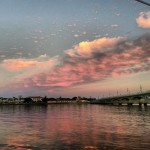 Middle Clouds – Alto (clouds that have bases between 6500 to 23,000 ft.
Altocumulus clouds are middle level clouds that are made of water droplets and appear as gray, puffy masses, sometimes rolled out in parallel waves or bands. The appearance of these clouds on a warm, humid summer morning often means thunderstorms may occur by late afternoon.
Altostratus clouds are gray or blue-gray middle level clouds composed of ice crystals and water droplets. These clouds usually cover the entire sky. In the thinner areas of the cloud, the sun may be dimly visible as a round disk. Altostratus clouds often form ahead of storms that will produce continuous precipitation. 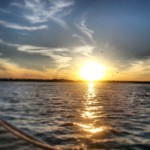 High Clouds – Cirrus
Cirrus clouds are thin, wispy clouds blown by high winds into long streamers. They are considered “high clouds” forming above 6000 m (20,000 ft). Cirrus clouds usually move across the sky from west to east. They generally mean fair to pleasant weather.
Cirrostratus clouds are thin, sheetlike high clouds that often cover the entire sky. They are so thin that the sun and moon can be seen through them.
Cirrocumulus clouds appear as small, rounded white puffs. The small ripples in the cirrocumulus sometimes resemble the scales of a fish. A sky with cirrocumulus clouds is sometimes referred to as a “mackerel sky.” 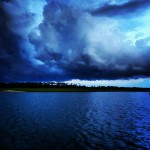 Clouds with Vertical Development – Cumulus
Cumulus clouds are puffy clouds that sometimes look like pieces of floating cotton. The base of each cloud is often flat and may be only 1000 meters (3300 feet) above the ground. The top of the cloud has rounded towers. When the top of the cumulus resembles the head of a cauliflower, it is called cumulus congestus or towering cumulus. These clouds grow upward, and they can develop into a giant cumulonimbus, which is a thunderstorm cloud.
Cumulonimbus clouds are thunderstorm clouds that form if cumulus congestus clouds continue to grow vertically. Their dark bases may be no more than 300 m (1000 ft) above the Earth’s surface. Their tops may extend upward to over 12,000 m (39,000 ft). Tremendous amounts of energy are released by the condensation of water vapor within a cumulonimbus. Lightning, thunder, and even violent tornadoes are associated with the cumulonimbus.